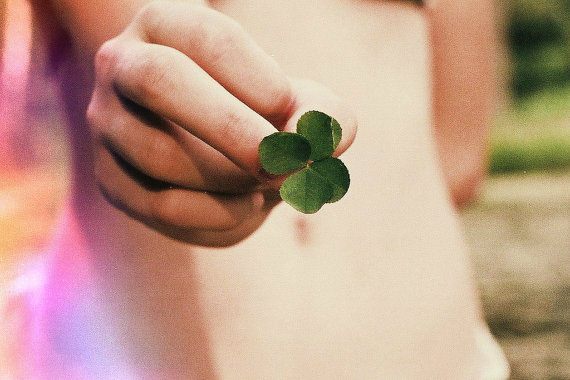 There are some entrepreneurs who seem to have all the luck, right? Amazing speaking gigs fall in their laps or they just happen to partner with some rock-star business tycoon and suddenly, they are making serious cash with lashings of online fame.

Am I the only one who’s had moments of insane jealousy over the latest entrepreneurial hot-shot?

I’ve been studying these people and as I’ve gained success in my own business, I’ve identified some common traits – and trust me – it’s anything but luck. There is very little accident behind the success of the break-out star or the overnight entrepreneurial success. Often it’s been years in the making and plenty of mistakes made.

But don’t worry, each trait is easily duplicated!

Gabby Bernstein, best-selling author of ‘Spirit Junkie’ and one of the most successful “new” entrepreneurs on the scene is undoubtedly a hustler. How do I know? Because I have a Google alert on her name and rarely a day goes by without a guest post, article or video from Gabby or one of her fans on the internet.

It used to annoy me every time, and I’ll admit a little jealousy of Gabby’s success until I snapped out of it and realised that nobody would offer me prestigious guest blogs or a book deal unless I got some serious Gabby work ethic and made it happen for myself.

Hustling takes daily dedication. What part of your business could use some more hustle? Pitching for blog posts or speaking gigs? Set up a daily goal and get it done.

Action – Set up Google alerts or check out the Alexa links of someone you admire in your industry and watch their activity. It will give you ideas, inspiration and might spark some healthy competitiveness.

2. They network like crazy and give more than they get

Really successful entrepreneurs are incredibly generous and expect little in return, but of course, it only makes people want to help them! It’s an attitude of generosity that gets repaid through authentic connections.

Take emerging internet marketing guru James Wedmore, who goes out of his way to share ideas for fellow entrepreneurs and frequently asks “How can I help YOU?” He’s 100% sincere about it without a hidden agenda, just a desire to build a great network around himself and spread the joy. Consequently, he’s always top of mind when I think about video marketing and social media. And here I am talking about him again (oh James, you so clever!).

Action – who can you promote today? Can you share posts and programs for your fellow entrepreneurs or do you have a great idea for someone? Let them know!

3. They ignore the haters

I recently heard hot-shot entrepreneur and ex-pro athlete, Lewis Howes say, “Even Mother Theresa had haters”. He also shared how he’s no longer afraid of success or failure and it’s a big reason why he’s been such a rapid success story.

But many entrepreneurs (especially women) fear public criticism and internet bullies so much that they shy away from the spotlight, or they let one mean comment ruin their whole business.

See your first hater as a huge accomplishment! It means that you’re starting to make an impact on your industry – and not everyone is going to love you. Asking for great success without a single criticism is unrealistic and could put your lucky break backward several years.

I turned off comments on my blog, ignore my unsubscribes and don’t read any bad press. In denial? Nope, I just know I function better with good news instead of the negative, so I filter accordingly.

Action – The number one rule is – don’t feed the trolls. They’ll just go attack someone else if you ignore them. Don’t take it personally and keep hustling.

Coach and author, Rachel Luna, had an enormous dream from the age of 16 – to be featured in Latina Magazine. Instead of wishing and hoping, she got frustrated and took action.

She publicly admitted her dream and flat out asked her network if anyone had the contacts at the magazine to make it happen. With two possible leads in hand, she pitched the magazine, and as it turns out, they were running a story on women entrepreneurs. Divine timing? Maybe – but if she didn’t ask, she might have missed the narrow opportunity.

Your network is incredibly powerful and a little name-dropping never hurt anyone.

Action – What’s your big dream? Who can you ask for help?

5. They create their own opportunities

Amanda Hocking, the twenty-something author and the current breakout darling of the self-publishing world has been pitching to traditional publishing houses for years.

In between ego-crushing rejection letters she was hustling; writing more books and creating her own lucky break through hard-work and savvy networking to build a community of raving fans. She sold more than million copies of her supernatural romance ebooks via free self-publishing platforms like Kindle and Smashwords before the publishing houses noticed and came a-knocking.

Action – What are you waiting for? Publish your own book, start your own internet radio show and blog, blog, blog. Soon nobody will be able to ignore you (and you’ll perfect your craft)

So, next time you catch yourself thinking “lucky bitch!”, just take a deep breath and remember that you alone create your own luck.

If each of these entrepreneurs can create their own “overnight success”, then so can you, and if you like these tips, come over and get my free ebook “Lucky Bitch Secrets of Outrageous Success”.