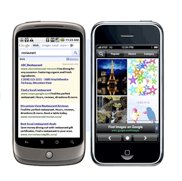 A study by Google Inc. found that mobile ads drive smartphone users to take actions such as visiting a Web site or making a purchase.

Google’s “The Mobile Movement: Understanding Smartphone Users” study found that 71 percent of smartphone users search after being exposed to ads online and offline. A whopping 82 percent notice mobile ads and 74 percent make a purchase as a result of using their phone during the shopping process.

“The findings of the study have strong implications for businesses and mobile advertisers,” said Dai Pham, a member of the mobile ads marketing team at Google, Mountain View, CA. “Make sure you can be found via mobile search as consumers regularly use their phones to find and act on information.

“Incorporate location-based products and services and make it easy for mobile customers to reach you because local information seeking is common among smartphone users,” he said.

In fact, 88 percent of those who look for local information on their smartphones take action within a day, Google found.

The study was commissioned by Google and conducted by Ipsos OTX, an independent market research firm, among 5,013 U.S. adult smartphone Internet users at the end of 2010.

General smartphone usage
There is no argument when it comes to the role that smartphones play in the daily lives of consumers.

Consumers are increasingly relying on their smartphones to multitask and consume other media.

Google’s study found that 81 percent of smartphone users browse the Internet, 77 percent search, 68 percent use an app, and 48 percent watch videos on their device.

The smartphone has turned into the always on companion. Consumers are using their devices even while they are consuming other forms of media.

In fact, 72 percent use their smartphones while consuming other media, with a third claiming they use their device while watching television.

At one point the mobile device was a means of reaching consumers on the go. But that has now changed.

With 93 percent of smartphone owners using their device while at home, the mobile phone is now a means of reaching consumers at all times.

Search engine Web sites are the most visited mobile Internet destinations, with 77 percent of smartphone users citing this, followed by social networking, retail and video-sharing sites.

What is interesting is that nine out of 10 smartphone searches result in an action such as purchase, visiting a business or a click-to-call.

Almost all smartphone users are looking for local information. And, consumers are ready to act on the information they find.

Google’s study found that 95 percent of smartphone users have looked for local information and 88 percent of these users take action within a day.

These findings indicate that there is a need for immediate information among smartphone users. A whopping 77 percent have contacted a business, with 61 percent calling and 59 percent visiting the local business.

Purchase-driven shoppers
At the end of the day, marketers are trying to drive sales. And smartphones have become an important part of the shopping process. They help shoppers research and make a purchase decision.

Google’s study uncovered that 79 percent of smartphone consumers use their phones to help with shopping via activities such as comparing prices, finding more product info and locating a retailer.

Seventy-four percent of consumers that use their mobile device during the shopping process make a purchase online, in-store or on their phones.

The study also found that 70 percent of consumers use their smartphones while in the store.

Reaching mobile consumers
A cross-media approach is the best way to influence the largest number of smartphone users. Different people use their devices for different things. In the end, as a marketer, it would be nice to reach them all.

A majority of smartphone users notice mobile ads, which leads to taking action on it.

In fact, 71 percent search on their phones because of an ad exposure, whether from traditional media (68 percent), online ads (18 percent) or mobile ads (27 percent).

Half of those who see a mobile ad take action, with 35 percent visiting a Web site and 49 percent making a purchase.

“Develop a comprehensive cross-channel strategy as mobile shoppers use their phones in-store, online and via mobile Web sites and apps to research and make purchase decisions,” Mr. Pham said.

“Last, implement an integrated marketing strategy with mobile advertising that takes advantage of the knowledge that people are using their smartphones while consuming other media and are influenced by it,” he said.