The Economy of You: Discover Your Inner Entrepreneur

I was so excited to hear about this great new book that reveals how to build financial freedom by creating a side-gig! It’s called The Economy of You: Discover Your Inner Entrepreneur and Recession-Proof Your Life, and it’s just been released today. 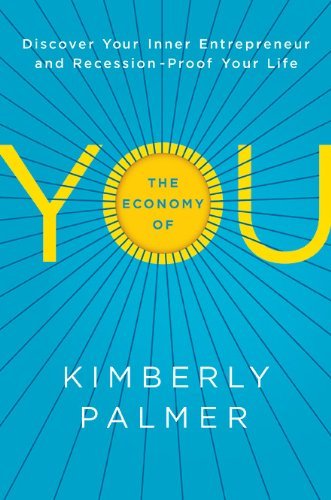 1. Waiting until you’re “ready” to launch. Many successful side-giggers discovered their side-gigs almost by accident; a friend asked them for a favor, and suddenly they were in the floral business, or running a social marketing consultancy, or pet-sitting. Instead of first building a Facebook page or stocking up on inventory, they said “yes” to the opportunity in front of them, and their side-gigs grew from there.

2. Letting the first failure stop your progress. Almost all established side-giggers experienced some kind of setback early on, and many still experience occasional failures: a pitch gets rejected, a client gives negative feedback, or a new digital product flops. “But they keep going,” Palmer stresses, “because they know that one rejection doesn’t mean their contributions are worthless. Instead, they take it as proof that they are trying something new and taking risks, some of which are bound to fail.”

3. Thinking you’re earning too little to make a difference. Many side-giggers make what seems like peanuts: $100 to $200 a month, or just a few thousand dollars a year. Over time, however, that money adds up—$3,000 a year equals around $40,000 after ten years if it’s in an account earning 5 percent interest. Plus, it represents new promise and potential in the event of a layoff. “An income of $200 a month, earned from working a few hours a week, can often be scaled up dramatically if time allows,” Palmer points out.

4. Overinvesting in start-up costs. It’s easy to plow savings into a side-gig before it’s even launched: a beautiful website, a professional marketing plan, new certifications. But before investing a cent, successful side-giggers often look for ways to bring in revenue, while simultaneously testing the market. That might mean offering nutrition consulting services before setting up a new website, or selling an e-book through an e-commerce channel before printing paperback versions.

5. Working too hard for too little. When side-giggers are first starting out, they sometimes make the mistake of undercharging for their services, or setting up a business model that would require a 100-hour-a-week schedule to earn a living wage. A classic example is selling a handcrafted crocheted sweater for the same price as a store bought, machine-produced one. “Simply charging more for products and services can signal quality to potential buyers,” Palmer observes. “Testing the market to see what it can bear, and checking out competitors’ prices, can help side-giggers avoid starting too low.”

In The Economy of You, Kimberly explores the biggest trend in business – microbusiness – starting with her own journey. Recognizing that journalism offers little job security, and with a new baby to provide for, she launched an Etsy shop of money planners to help create a financial cushion. She figured out how to run a small business on the side, finding time to land coverage on blogs and create new products on the weekends. After much trial and error, she eventually found a way to earn an extra $10,000 a year from her Etsy shop and other freelance work. She’s not the only one: The Bureau of Labor Statistics reports that over 7 million workers hold more than one job, and they’re motivated by the desire to earn more money and meet expenses or pay off debt, as well as sheer enjoyment of their second job.

The Economy of You recounts stories of people who, like Kimberly, are liberating themselves from financial strain with a side-gig, guaranteeing their own financial security in the current economy, and finding a sense of fulfillment they never dreamed possible by unlocking their creativity. Kimberly interviewed 100 successful side-giggers, including a deli employee who makes custom cakes at night, a videographer who started a profitable publishing house on the side, and a meeting planner who is a professional opera singer on the weekends and evenings.
Kimberly also shares concrete guidelines, giving readers the tools they need to launch their own successful side-business, including:

Companies guarantee nothing but today’s wages. It’s up to YOU to build stability by becoming a money-making engine. It’s empowering, gratifying, and easy to do with The Economy of You. Stay tuned for an exclusive Create Hype interview featuring author, Kimberly Palmer!