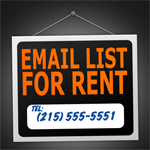 Computers combined with the Internet have made building huge lists not only very common, but also much easier than in the past. Of course, it does help if you’re a well known celebrity or have a well known brand name. Lady GaGa just passed 10 million followers on Twitter, putting Ashton Kutcher to shame with around 7 million and leaving Google in the dust which has a mere 3 million followers.

However, Google would probably be your best bet if you want to argue that lists in the billions are definitely possible. Just consider all the people who use Gmail, Google Accounts, iGoogle, ChromeBrowser, Chromebook, YouTube… and all the other countless programs and sites
Google controls and collects contact information from its users. Of course, only Google knows the exact numbers, but you would probably end up counting a lot of zeros.

Then you have to consider other major list builders on the web such as Facebook, Twitter, LinkedIn… all of these are racking up impressive numbers and bringing up the value of their stocks in the process. In actual fact, it could be argued that the company which ends up with the most people on their list will be the ultimate winner on the web. The advertising and marketing power of having a detailed profile (with all the contact and background information, buying habits and even credit scores) on hundreds of millions or even billions of Internet users is simply priceless.

One sometimes gets the feeling that the average person on the street has no idea how priceless these lists really are? They simply don’t realize how economically valuable having all this information at your disposal can be AND how having permission to email, phone or write to these members or contacts can be used to your advantage? Unless you have seen these economic benefits first-hand and in practice, you will not be able to fully grasp the significance or the true power of list building.

And we are not just talking about big name multinational companies here, the same applies to any small business owner or webmaster. Building your contact list can prove very beneficial and worthwhile. Even building a community around your site or blog can prove very helpful when it comes to building traffic, gaining backlinks and improving your sales. Mainly because, as any marketer will tell you, having a ready list of targeted potential customers for your products or services will improve your bottom line. A list of repeat customers is worth its weight in gold.

But how realistic is it for the average marketer or webmaster to build a list in the thousands or even millions? That answer will depend on how much traffic you’re currently getting with your site or sites? If you have a steady flow of targeted traffic then building a list in the thousands will be quite easy, most times it will simply mean placing a subscribe form/box on all your webpages. Add a free ebook, ecourse or report and you will probably double those numbers. Actively building your list with article marketing, co-op list building, videos…will push those subscription numbers even higher.

Actually, building lists in the millions, is not out of the question. There are plenty of pimple-faced teenagers on YouTube and Twitter who have millions of subscribers or followers. And while these third-party sites are not ideal, they do make list building relatively simple and easy. In the case of YouTube, you do have a lucrative income stream (Google Adsense) already built into the system.

However, as every list builder knows, you shouldn’t get hung up on the numbers. It is not the size of your list which counts, but how effective you are at building a responsive relationship with your subscribers. For example, if you have a list of 10,000 and 10% buy your product or click your link then that’s as good as having a list of 100,000 where only 1% buy your product or click your link.

The same goes for a list in the billions, it will be the effectiveness of these lists which will be the key to their worth. In the coming years, one would imagine that a Google or a Microsoft will know how to handle and market these lists of billions. Fortunes could even rise or fall on how well these relationships are built and nurtured. If you don’t believe any of this is possible, then you still have a lot to learn about list building.